I have been looking to get pcap data into a database to do some aggregation and analysis for some time now. A few days ago I came across C5 SIGMA from Command Five

C5 SIGMA takes network packet capture (pcap) data as input and produces a structured relational database that can be used for analysis and reporting using SQL queries.
This software automates TShark (a component of the free network protocol analysis tool Wireshark) to produce structured XML metadata about the packets within a collection of pcap files. The metadata is then stored in a relational database using a database schema automatically derived from the XML

I ran the pcap file from Puzzle #10 through C5 SIGMA using a SQL Server 2012 Database. Running SIGMA from source code in the Visual Studio debugger with no filters and a local SQL Server instance all running from a laptop it took about 5 minutes to process.

SIGMA displayed 20 warnings while processing the data, 4 about SQL column type incompatibility, the code gracefully modifies the database column data type to accept the value if required. The other warnings were to do with data truncation due to the nvarchar(4000) limit, I will have a look at adding an option to allow nvarchar(max). The SQL Server (max) datataypes have become a less restrictive over the versions and especially so with SQL Server 2012.

Below is just the HTTP subset of tables. 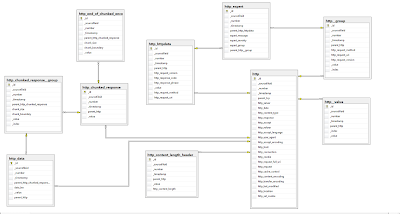 I wanted to be able to do all my analysis from the SQL Server 2012 Management Studio however SQL Server 2012 does not have a Regex function, but it does have the ability to create CLR Functions in C# that can be called from SQL.

I created some Inline functions with Regex to parse a single parameter value from a full URI and one to remove anything past a ?, =, &, or ; from a full URI.

Now we can run queries to filter on the parameter 'q' used by most search boxes on web pages, not just Google and Bing 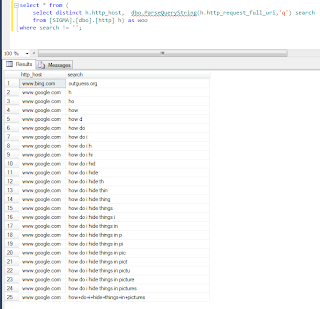 You will even see Google instant results for whatever the user typed.

Depending on what you are looking for, you could run something like this to get list of URLs visited. 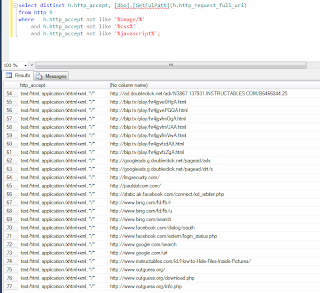 It is possible to do way more then just http analysis e.g. simple arp enumeration

Take a look at C5 SIGMA yourself and have a play.
Posted by Unknown at 11:39